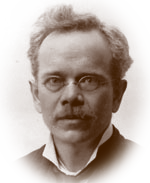 In 1884 E. J. Waggoner became assistant editor of the Signs of the Times, under his father,J. H. Waggoner. Two years later, he and A. T. Jones became editors of the same journal, Waggoner remaining in the position until 1891.

At the 1888 General Conference session in Minneapolis, Minnesota, he and Jones gave their famous series of sermons on righteousness by faith.

In 1892 he became editor of the Present Truth, in England, where he lived until 1902. While there he conducted, with W. W. Prescott, a workers’ training school and, for a short time, was president of the South England Conference.

After returning to the United States, he worked briefly on the staff of Emmanuel Missionary College.

Domestic difficulties led to divorce and remarriage, resulting in his becoming separated from denominational employment. Some used this as a springboard to discredit his positive testimony on righteousness by faith, as Mrs. White once warned might happen if he were overthrown by the temptations of the enemy.

Regardless of what happened to the man, Mrs. White declared about the message, “I see the beauty of truth in the presentation of the righteousness of Christ in relation to the law as the doctor has placed it before us.” MS 15, 1888. She also said, “When the Lord had given to my brethren the burden to proclaim this message, I felt inexpressively grateful to God, for I know it was the message for this time.” MS. 24, 1888.

There are no public messages.