Stephen Haskell was an evangelist and administrator. He began preaching for the non-Sabbatarian Adventists in New England in 1853, and later the same year began to observe 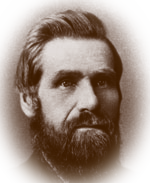 In 1885 he was in charge of a group that was sent to open denominational work in Australia and New Zealand. In 1887, with three Bible instructors he began SDA work in London, England. He made a world tour on behalf of missionary work in 1889-1890, visiting Western Europe, Southern Africa, India, China, Japan, and Australia.

Another of Haskell’s “firsts” was the organization of the first SDA church of African Americans in New York City (1902). He led in temperance work in Maine (1911), began printing books for the blind (1912), and assisted in the development of the White Memorial Hospital (1916). His written works include The Story of Daniel the Prophet, The Story of the Seer of Patmos, and The Cross and Its Shadow.

Come Out of Her My People

The Glory of God in the Earth