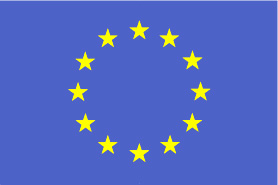 the flag of the Europen Union (EU)

European Parliament building in Strausburg. This building was designed by Richard Rogers, using strong references to a painting by Pieter Brueghel the Elder 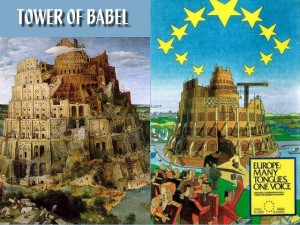 On the far left is a 1563 painting of the Tower of Babel, painted by Pieter Brueghel the Elder, who was a Northern Resaissance Painter. On the right is a poster produced by the EU. It uses the 12 stars of the EU flag with the rebuilding of the tower of Babel. The EU motto is Europe: Many Tongues One Voice. The poster was withdrawn after Christians protested, but its production speaks volumes about European aspirations. 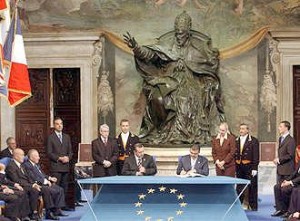 Capitoline Hill, Rome, October 29, 2004 – Signing the new EU constitution in the Apparatamento dei Conservatori, Sala degli Orazi e Curiazi. The bronze statue in the back is of Pope Innocent X by Alessandro Algardi.

The Laeken Declaration asks: “Does Europe not, now that is finally unified, have a leading role to play in a new world order, that of a power able both to play a stabilising role worldwide and to point the way ahead for many countries and peoples? Europe as the continent of humane values, the Magna Carta, the Bill of Rights, the French Revolution and the fall of the Berlin Wall; the continent of liberty, solidarity and above all diversity, meaning respect for others’ languages, cultures and traditions. The European Union’s one boundary is democracy and human rights. The Union is open only to countries which uphold basic values such as free elections, respect for minorities and respect for the rule of law.” Delanty, G. (1995) Inventing Europe – Idea, Identity, Reality. London: MacMillan.